Lyn Roman had begun her major label recording career under her own name, Linda Griner. In 1963, she released one single for Motown which was written and produced by Smokey Robinson. “Good-By Cruel Love” and “Envious” are two of the greatest sides ever recorded by the label and it should have been obvious to all that Smokey had made a major discovery. But, somehow, Motown dropped the ball with this record and Griner was let go from the label despite the fact that Smokey had already cut an entire album on her which remains unreleased to this day. Adopting the stage name of “Lyn Roman,” she reappeared the following year as a Columbia Records artist for one album, “The Many Faces of Lyn Roman.” Although a fine effort, it is more in the style of Aretha’s Columbia albums – standards and pop tunes sung in a jazzy style – and was not a truly befitting setting for one of the greatest soul voices of all time. Following her departure from Columbia, she had become successful on the nightclub scene and was touring extensively with comedian Redd Foxx when she was re-discovered by Gerry. Recognizing her incredible potential, he signed her to Dot and produced what today are considered two of the finest soul albums by a female artist ever recorded, “The Greatest Roman Of Them All” and “A Girl For All Reasons.” Gerry and Linda came up with a combination of down-home soul, uptown production and perfect material which should have done for Griner what the switch from Columbia Records to Atlantic had done for Aretha Franklin, but Dot’s promotional machine failed and the LPs were relegated to the cutout bins in short order. When combined with the disappointing performance of the promo department in regards to some of the other great talents he’d discovered but the label had ignored (such as soul man Phil Flowers, composer-conductor John Williams and future country giant Lee Greenwood), it was just too much for him to take and Gerry gave his notice in late 1969.

(Update, May, 2013: As Lyn Roman, Griner continued on recording singles for Mercury with the legendary Ed Townsend and Brunswick, and became a major star in Europe. She eventually recorded another fine album, “Wanted,” for Ichiban Records in 1987. In the 1990s, she returned to using her real name and released a truly great album for Motorcity/Charly called “Bitter End.” Her 1960s and ’70s records are now considered some of the finest soul music ever recorded and original pressings can fetch hundreds of dollars. In the 2000s, her career has been undergoing a remarkable resurgence. She is still performing and recording and has new album available on her website: www.lindagrinermusic.com/) 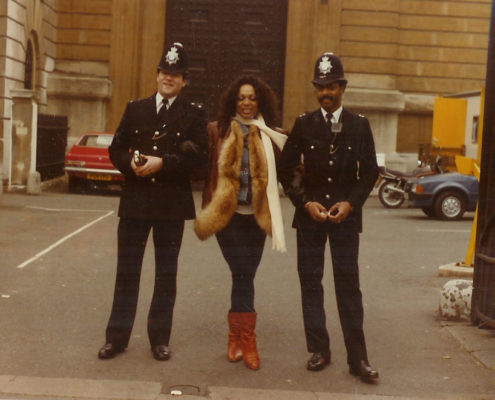 So great was Linda’s fame in England in the late ’60s/early ’70s that she could not only interrupt the changing of the guard at Buckingham Palace, but she could get these normally staid bobbies to crack a smile!